This first in a series of posts describing a simple system of determining the maximum population levels of large hex-based map areas inhabited by cultures with a High Middle Ages style technology and culture. This is good for European-like human or even halfling lands but is not really suitable for barbarian cultures, elves, and more magical based societies.
This system makes two important major assumptions:
This post focuses at the foundation levels of land use at the 1 mile hex and the 5 mile hex scale.
Each manor has a population of 100 able bodied adults and occupies one 1 mile hex. In each of the hexes surrounding it, there is a zone of exclusion in which no other settlement may occupy. Two manor's zones may overlap however. This zone represents the area in which shepherds graze animals, game is hunted and firewood is collected. All of the inhabitants are considered apart of the rural population regardless of occupation or station. Most of the population are serfs with limited personal freedoms. Each manor consists of a manor house, a small hamlet, a church, a few craft workshops such as a small smithy and a perhaps mill. It farms approximately 500 acres of land and may have a small scale mining operation on the side as well. This sort of settlement has been well described in Dungeon and Dragon terms in The Village of Hommlet. 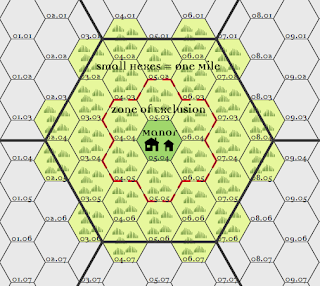 Villages are the smallest self-sufficient urban settlements and contain the hexes' urban population. It occupies one 1 mile hex and in each of the hexes surrounding it, there is a exclusive zone of exclusion which can not be shared with any other settlement. The total population of the village is 350 able bodied adults. 100 of these villagers are engaged in the same sort of rural activities as manor populations and the other 250 villages are the hexes' urban dwellers. They urban population is engaged mostly in trade and manufacture. All of the village population are considered freemen. 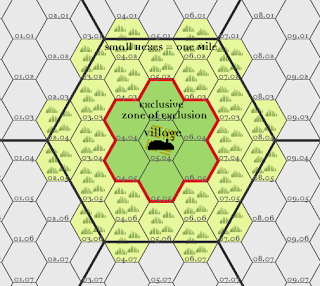 Here is an example of a 5 mile hex with the maximum self-contained population level of 750 able-bodied adults living in 4 manors and and one village: 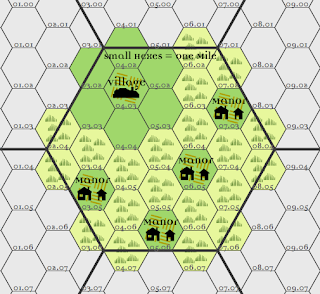 Here is an example of a 5 mile hex supporting a maximum population level of 1050. 700 able-bodied adults live in this hex in 7 manors and they are able to support 350 urban dwellers in a town or city in a nearby hex: 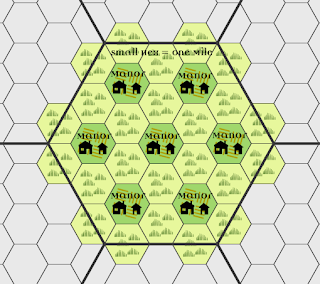 Each town or city occupies at least one 1 mile hex and has a zone of exclusion extending for two hexes around it that can not be shared with any external settlement. Small suburban settlements may be located within the zone of exclusion but their population must be included in the total population of the main town or city. Thus, towns and cities occupy one 5 mile hex in total.
In any settlement larger than a village, the entire population is considered urban and totally reliant on imported food from the country side. Dungeons and Dragons defines towns as having populations of 1000 people or more so the smallest town would require a minimum of 21 manor houses to support its citizens. If those manors were packed together at maximum density they would require three 5 mile hexes of plains.
The next post will look at population on the 25 mile hex scale and at Birthright style provinces. Also, terrain will be consider in determining the maximum amount of arable land.
Related links:
Bat in the Attic: Mapping, Manors vs Farms
The Tao of D&D: Estate du General
Medieval Demographics Made Easy
Farming the Middle Ages
Posted by The Hex Master at 6:17 PM