The Roadmap
I've been in the process of using the excuse of 4e D&D to seriously revamp and retool my DIY campaign world and turning it from 20 years of notes and maps crammed in three ring binders, notebooks, memories and stray digital files into a coherent digital form. These are my design goals for this project.
Purpose
The result of this project should be a document which is able to convey to the reader a sense of place via an understanding of its internal relationships to a point that the reader can become an active participate in the game world. It should also serve as a reference for the DM and a source for adventure ideas and opportunities.
The project should emphasize that this is a living world and the document is just a snap shot of its present state. The reader should not be bombarded with over detailed backstories of places, kingdoms and NPCs but presented with just enough information to establish flavor and the current relationships of power within the world. It should lay bare the mechanisms of those power relationships should the players choose to manipulate them in advancing their own agendas or resist in becoming the pawns of the agendas of others.
Inspiration for the DM should come from highlighting tensions in these power relationships. At heroic tier of play, the settling should provide backdrops and motivations for the actions of NPCs. At the Paragon tier, players should have the influence necessary to engage in political sandbox style play.
It should also provide the DM with reference materials for practical details like calendar and timekeeping material, weather, cultural quirks, province stats, price lists for special items, etc.
Look and Format
I'd like the final form of the project to be a pdf file with letter size pages which can be sent to a short run printer for bound hard copies. It should look nice, with considerations to graphic design and it should include art work.
I've been using the same table design and color coding that the 4e D&D books have been using for easy of use and that's been working out well. I've chosen the Democratica and Minion typefaces, the same ones from the Birthright setting. I considered using Souvenir, one of the OD&D fonts, but it felt too out of place for a 4e project.
Having a clear mental image to help convey the mood for my campaign has always been important to me and I'd like that to reflect in the finished project. I've been to art school and I have some talent for drawing but it's not what I really want to be spending my time on right now so I've decided to loot and steal from the Internet instead. I'm not really a huge fan of most modern fantasy illustration. If I could commission an artist, I'd pick someone not known for RPG industry illustration like Zak Smith. But I can't. The fantasy images I have been drawn to are older things like Arthur Rackham's illustrations for Malory's Le Morte d'Arthur, which is fortunately as Rackham died in 1939 making his works available to the public domain as of January 1, 2010. Problem solved.
Macrogaming
I'd like the political, economic and religious aspects of the campaign to be playable simulations in their own right, and suited to be simulated with a computer program.
Much like Birthright, only better, or the Civilization computer games. This means clearly defining from vague notes and murky memories who the political actors are, what greases the economic engines and deciding which gods and their followers care to enter they fray at this level. I would like the structure of these organizations to be defined from the level a starting player character would first encounter them to the level a paragon level player character would interacting with them while ruling one. It's important that these organizations can be made to bend to player whim and not just be collections of powerful and unchanging NPCs. I'd like to allow sandbox style play at the nation/state level too.
Getting it running on a computer will probably be a secondary but parallel project once all the initial mechanics are worked out. I'll probably use Ruby on Rails and make it web based.
Cartography
For the world map, I want the political granularity of the Birthright campaign setting's provinces and domains with the practicality of the Wilderlands setting's 1/5/25 mile hex system.
Over the years I've gone back and forth on hex mapping verses free hand mapping verses using digital tools such Adobe Creative Suite or some unholy combination of the three. Aesthetics has been my primary gripe with most hex based systems. Hand drawn or Photoshop drawn maps have looked the best but they can get labor intensive to plot out and constantly update. Hex maps have the advantage of years of acceptance within the RPG industry with lots of literature available on using the abstraction of a hex based world to a DMs advantage. Plus it's nice to be able to pin point a one mile hex in relation to the campaign map; i.e. one mile hex xx,yy of five mile xx,yy of 25 mile hex xx,yy. (So nice, in fact, I named a blog after it...)
I've been using Java based Hexogrpaher to map an 80 by 60 25 mile hex map of Moranth and I'm very pleased with the results so far. Running them through Photoshop for some post processing is getting good results: 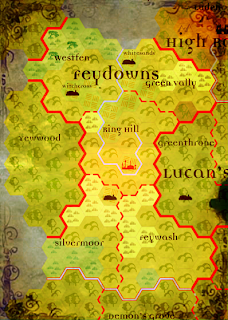 I've been putting the most work into fleshing out economic base of Moranth and I feel I've got the rural/feudal/agricultural bits down in a fairly solid manner. The urban and trading parts are still a bit of a haze to me as are the magical/fantasy considerations. I'll save that for next time.