The Tao of D&D author Alexis' posts on his extremely detailed economic system have been a large influence on my thinking for the economic system in my campaign. In his recent post Let's Try It From The Beginning Again he summarizes his approach. While I'm not interested in the achieving the same level of granularity his system explores, I am fascinated by some of the mechanics he uses. In the comments of his post, I asked,

"I calculate my total gold in the system by the use of the United Nations International Statistics Yearbook 1988, which gives the gold produced for that year as 1,771,000 kg. In comparing 1988 with 1650, research I’ve done suggests that the increase in industrial production during that period increased approximately 50,000% ... giving me a nice, round number with which to divide; so 1,771,000 kg over 500 gives approximately 311,000 oz of gold distributed through my system (I use imperial measurements for my world, so the metric is converted).

I’m not dead sure about those numbers, I don’t have my work in front of me, but it is somewhere around those.

It does not take into account ‘circulating gold,’ which I estimate is 9 times the gold produced in a year ... this based on the principle that 1% of all made or resourced material becomes unusable per month. This doesn’t hold for agricultural goods, obviously, but I overlook that because the system demands as much simplification as possible, and I don’t give a shit. I get around the issue by comparing the total gold produced in one year against the total of everything produced in one year.

(adjusted, of course, for industrial development to 1650)"

I'm particularly impressed with his 1% monthly loss rule which elegantly and simply solves a nagging worry I had about "excess" wealth building up.

But another worry of mine is that while Alexis is conquering his entire world, I'm only taking on an Europe-sized section of mine and I need to develop a system of determining the circulating wealth of this fractional land. I have attempted to solve this problem by determining an average gold production per capita.

Now let's look again at domain Lisonne and populate it: 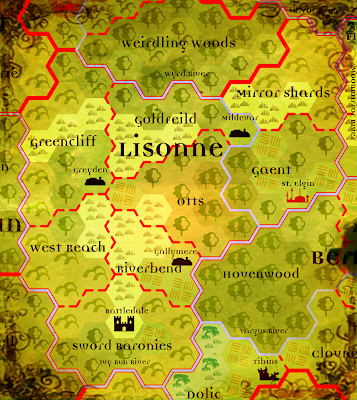 The coin column is the amount of hard currency in the province as determined in the last post.

Lisonne has a total population of 138000 people and should have 41000 GPs worth of coin in circulation. But can our gold production numbers support that? Let's find out: 138000 times 0.006 gives us 828 ounces or 4140 GP of yearly gold production. Multiply that by 10 to find the total amount of gold in circulation and we get 41400 GP. Not bad at all! It certainly gives me confidence I'm on the right track.

Next post in this series will detail the actual goods tracked and why, the effect of distance on price, the effects of borders and law level on trade and how I'm setting myself up for coding up some complicated shortest path algorithm in the near future.